Here are the doors. There are intentionally slightly too big so as to allow for a rabbet on the middle edges where they will overlap when the doors are shut, and so I can plane them to size when I have the frame built. 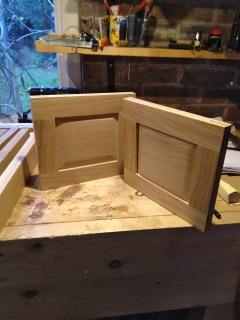 I used Bridle joints at the corners. I made a simple jig to guide the marking and cutting. The jig relies on getting the width of each piece planed accurately. 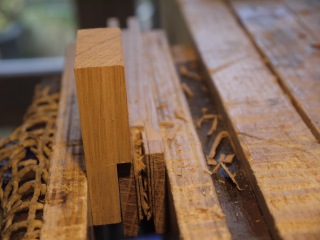 Yet again a bit of machinery would have made these easier to cut, and more accurate, but where’s the fun in that? 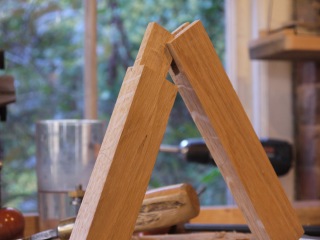 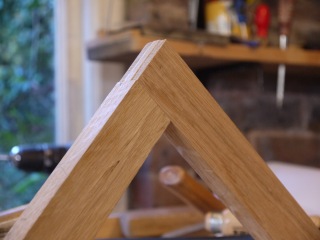 The middle panel is a single piece planed down to be about 1/2cm thinner than the frame pieces so i’ll be able to plane the frame without touching the panel when its all glued together. The edges of each panel are planed to a bevel so they’ll fit in the grooves I’m going to cut in the inside edges of the frame pieces. 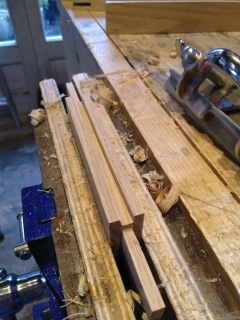 The grooves are the same width as the tongue (or slot) of the joints. I used a mortise gauge to cut the surface where the groove was going in order to give a cleaner edge to the groove, then the plough plane, as pictured above, made light work of cutting the grooves.

I foolishly didn’t take any pictures of making the panels so you’ll have to use your imaginations. I marked a line about 2.5cm in from each edge on both sides and planed a bevel from this line down to the edge on both side until the edge fits neatly into the relevant groove in the frame.

Before gluing up make sure the panel fits in the frame allowing for a little bit of movement. Clean up the panels and inside edges as this will be tricky to do once the frame is glued.

When it all fits together and the joints seat nicely it can be glued. Just glue the joints not the panel.

Next I’ll cut the mortises in the legs and the tenons in the rails.